Drawing inspiration from the great bands, performers and composers of the

Don Neely and the Royal Society Jazz Orchestra affectionately and authentically recapture the excitement and fascination of that musical heyday. They are guided by their affinity for the superb music of innovators active in the 1920s and '30s, such as

Walter Donaldson. The Royal Society Jazz Orchestra and smaller ensembles have enchanted audiences across the country with their entertaining combination of great songs and authentic style in their live performances and CDs.

Songs, Singers and the Cinema

Sofie Tucker.  And what songs! "

Wrap Your Troubles In Dreams, " "

Moten Swing, " "Hello Beautiful," and "Shakin' The Blues Away." Don Neely draws from many sources, including the best of Silver Screen and Broadway classics, including those directed and choreographed by

Footlight Parade. Classic films such as

The Blue Angel are among those that serve as artistic inspirations.

Exploring the Musical Nuances of the 1920s and '30s

One of the many things that set this eleven-member ensemble apart is their genuine understanding of the music they perform. By going back and carefully studying the original musical ideas of the period, they are able to achieve their remarkably authentic sound. The band's entertaining and talented soloists are creatively spotlighted in their exciting and varied show, providing many delightful surprises. The RSJO plays with pizzaz  — from intricately-faceted, 1920s Syncopated Jazz to ultra-sleek, 1930s Big Band Swing. 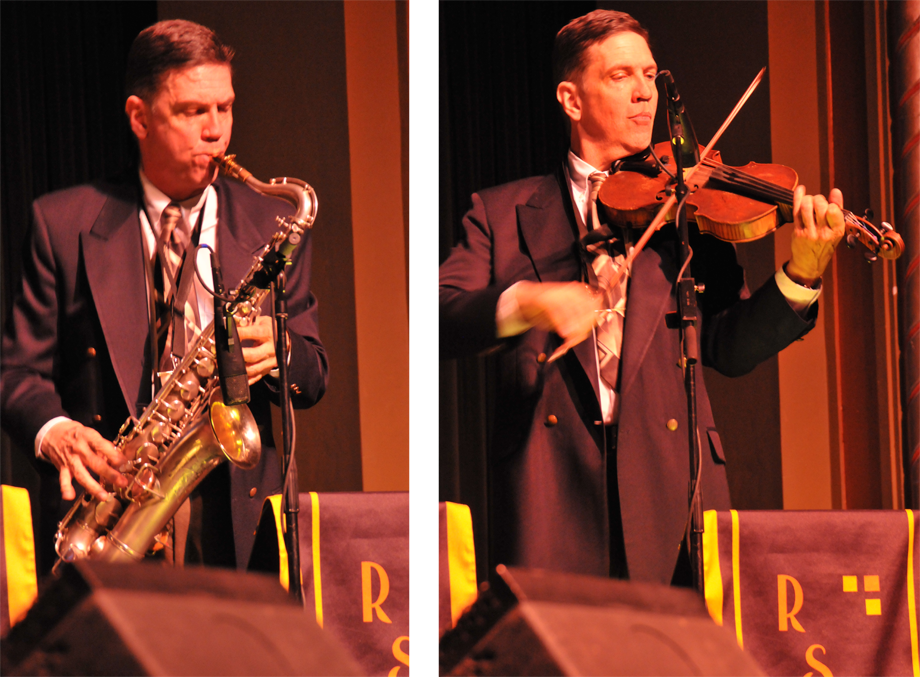 Original Spirit of the Music

When the reeds and brass sound their first rousing phrases, audiences realize they are in for a rare treat. Capturing the exhilarating spirit and stylistic nuances of the music, they deliver each song in a warmly expressive style.

Don Neely's insightful and often humorous comments on the microphone about the songs and their history are as entertaining as they are educational. Vocalist

Carla Normand delights with her authentic sound and style.

Frederick Hodges electrifies with his piano virtuosity. Each jazz solo is improvised in the style of the era, and is a creation of the musician who plays it.
Jazz Age Fun
The band plays soaring hot jazz, authentic Dixieland, sweet love ballads, lowdown blues and hilarious novelties in a warmly expressive style. The RSJO's propulsive rhythms and inventive harmonies capture audiences in their spell and deliver them to the Jazz Age, setting their hearts and feet to dancing. A concert journey with the RSJO covers a fascinating panorama of classic 1920s and '30s music. They include songs from red-hot

Vaudeville shows, and Broadway and film musicals from that artistically fertile time known as the

Art Deco era. This period gave birth to some of the most stylish and intriguing music ever created. The RSJO presents a stirring array of selections drawn from this musical cornucopia -- from the most celebrated and enduring songs to recently rediscovered gems. Experiencing a performance by the Royal Society Jazz Orchestra is a wonderful tonic, alive with fun, and guaranteed to lift the spirits.