Where the Royal Society Jazz Orchestra and our Smaller Ensembles Really Shine.
When the reeds and brass sound their first rousing phrases, concert audiences realize they are in for a rare treat. Capturing the exhilarating spirit and stylistic nuances of the music, they deliver each song in a warmly expressive style.

Don Neely's insightful and often humorous comments on the microphone describing the songs and their historical aspects are as entertaining as they are educational. Vocalist

Carla Normand delights with her authentic sound and style.

Frederick Hodges electrifies with his piano virtuosity. Each jazz solo is improvised in the style of the era, and is a creation of the musician who plays it.  Visit the page

"Our Music" to learn more about our music.
The Art Deco Era
The band plays soaring hot jazz, sweet love ballads, lowdown blues, and hilarious novelties in a warmly expressive style. The RSJO's propulsive rhythms and inventive harmonies capture audiences in their spell and deliver them to the Jazz Age, setting their hearts and feet to dancing. A concert journey with the RSJO covers a fascinating panorama of classic 1920s and '30s music. They include songs from red-hot

Vaudeville shows, and Broadway and film musicals from that artistically fertile time known as the

Art Deco era. This period gave birth to some of the most stylish and intriguing music ever created. The RSJO presents a stirring array of selections drawn from this musical cornucopia — from the most celebrated and enduring songs to recently rediscovered gems. Experiencing a performance by the Royal Society Jazz Orchestra is a wonderful tonic, alive with fun, and guaranteed to lift the spirits. 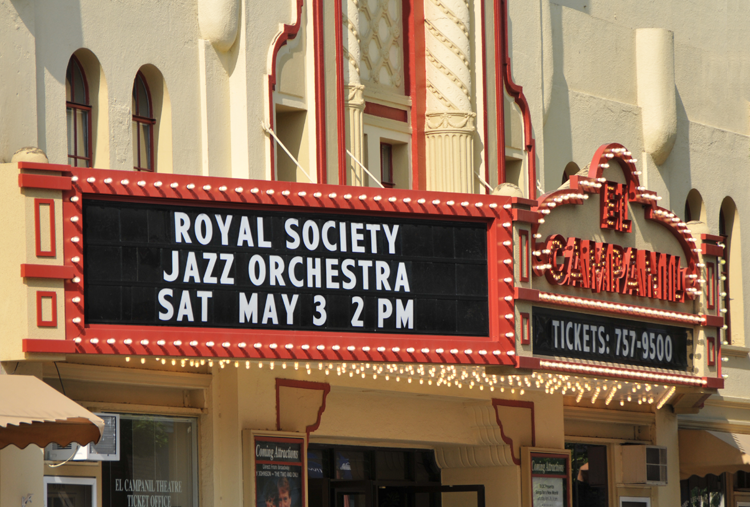 A prolific recording ensemble, they over 15 critically-acclaimed compact discs to their credit. Bandleader, Don Neely has written numerous catchy songs in the 1920s and '30s style, many of which have been recorded by the RSJO. In addition to concert appearances, they have enjoyed long-running engagements at several famous hotels. They have played for several San Francisco Black and White Balls, opening night galas for the San Francisco Symphony, Opera, and Ballet, international cruises and scores of high profile San Francisco social events. The orchestra was voted #1 Favorite Big Band in the Jazzology Poll, and was voted most popular Big Band in the American Rag music poll. The RSJO's popularity and authenticity inspire many large-scale Art Deco-era-themed events in the San Francisco Bay Area and beyond.